SEL carried out an ESOS Phase 2 energy audit at several sites for an international chemical company.

Across the sites visited as part of this audit there were many examples of good energy management practices and improvements, however, there did not appear to be a comprehensive over-arching energy strategy across or within the sites which appeared to have led to potential energy management opportunities being overlooked. Consequently, there was a lack of common strategy and goals with respect to energy management. 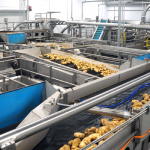