Synergie Environ was commissioned by Scottish Enterprise to carry out an initial desktop study to investigate practicable options for recycling waste scallop shells. Sham recovery – i.e. illegal disposal – of shells has caused environmental problems in the past and there have been nuisance issues associated with the use of shells in low grade recycling applications such as forestry tracks. The initial piece of work identified the use of crushed shell as a substitute for agricultural lime as a substantial commercial opportunity, with the current Scottish market for lime worth > £4 million per annum.

A further commission by Scottish Enterprise supported a successful application to the Zero Waste Scotland Recycling Innovation Fund, resulting in an investment of £120,000 to trial a new shell recycling process at a site near Aberdeenshire. The trail tested the efficacy of the recycling equipment and also field-tested the recycled shell, comparing its liming properties to that of a comparable traditional lime product. The project also required a Working Method to be developed as part of a formal site Waste Management Licence, setting the standard for other site’s handling and processing waste shells in future. In total, the trial is expected to result in the diversion of an estimated 3,000 tonnes per annum of waste shells from landfill.
The results of the trial have been extremely positive and well-received by the environmental regulator, SEPA. 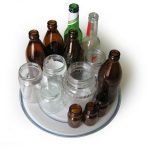