To avoid reducing economic benefits from the sites’ gas fired combined heat and power plants, and maximise heat pump efficiency, it was proposed to supply low temperature heat to the swimming pools.

Synergie Environ estimated a simple payback of thirteen years, an internal rate of return (IRR) of 3.5% at twenty-five years, and greenhouse gas savings of 24 kt CO2e – a 91% reduction from business-as-usual. However, if gas prices increase as forecast and the heat pump operated using off-peak electricity, it was estimated that the development would payback within ten years, with a twenty-five-year IRR of 7.5%.

Geothermal heat could be more attractive where new natural gas networks would be required, as this would reduce its marginal cost. In addition, HM Government has a stated goal to reduce use of fossil fuel boilers. Consequently, it is recommended that the potential for geothermal heat is considered at an early stage of development.

Synergie Environ have worked on several projects with TownRock Energy and look forward to continuing our work with them to best utilise our geological assets. 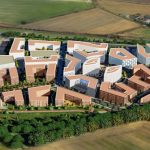